MARCH 2022 – The prevalence rate of scoliosis in PWS has not been well established with figures ranging between 40% to 80% of patients in various studies and surveys. It is known that scoliosis typically increases with age, with occurrence data ranging from 23% of children with PWS before 4 years, to around 70% of adults with PWS.

The purpose of this Italian study was to investigate the prevalence and characteristics of scoliosis in a large cohort of children and adults with PWS. The cohort included 180 patients aged 1.7 – 49.7 years. 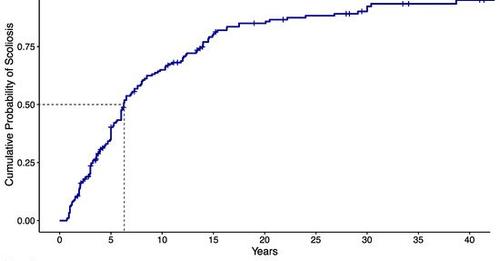 No significant difference was observed between patients who started GHT before receiving a diagnosis of scoliosis compared with those who were never treated or those who started GHT after diagnosis of scoliosis, confirming that GHT is not a risk factor affecting the development of scoliosis.
Some previous studies had found a slightly higher chance of developing scoliosis in both females and those with UPD, with both having an equal risk of curve progression. However, the Italian research team found that both gender and genotype were not significantly associated with the risk of developing scoliosis, although they did observe that a severe form of scoliosis was more prevalent in females (p = 0.025).
These findings underline the need for early radiographic screening once a child can sit unassisted along with a thorough clinical examination. The researchers emphasise that scoliosis may not be well recognised in the presence of obesity and/or hypotonia. They also stress the importance of continued regular monitoring for the development or progression of spinal deformity.
growth hormonescoliosis
Please Share This
Related Posts

NOV 2018 - In this study, Drs. Rice, Einfeld and Woodcock aimed to develop a…

Visit Our Event Calendar for upcoming events in NZ.

Disclaimer: This website is intended to provide information only and is not intended to replace professional medical advice, diagnosis or treatment. Always consult qualified healthcare providers with any questions regarding a medical condition. Do not delay seeking medical advice with any concerns.